By spending a month in Accra, the capital of Ghana, I had the unique chance to get to know the way of life in a country very different from Germany.

Ghana is one of the more stable countries of Africa and has a healthcare system ruled by the government.There are appoximately 200 hospitals, which are mostly located in the cities. On the other hand, the rural areas lack modern healthcare institutions and therefore remain dominated by traditional African healthcare. NHIS, the National Health Insurance Scheme, theoretically provides coverage in case of an hospitalisation. However, the patients I was in touch with were charged before they got their treatment.

My internship took place at the La General Hospital, one of the poorest governmental clinics in Accra. That may be an explanation for the partly questionable conditions.The La General was established in 1963 as ‚La Polyclinic‘ and became the district hospital ‚La General‘ in 2004. It has an 117-bed-capacity and employs more than 200 health workers. Still the capacity is way too low to serve the 221,000 inhabitants of the district ‚La‘.

The first week I spent at the emergency ward accompanied by a fellow TUMKolleg student who had been travelling with me. The ward had a capacity of five beds even though one bed was reserved for privileged patients and therefore only occupied once. Our daily jobs included the cleaning and refilling of bedsheets, disinfected cotton and clean water in the morning as well as assisting the nurses in establishing venous accesses or taking blood samples from the patients. We were entrusted with the tasks of removing the venous accesses, giving drugs to the patients and doing the 10am-checkup of vital parameters such as heart rate, blood pressure, body temperature, oxygen saturation and respiration.

The next week I visited the general OPD (outpatient department) while my classmate went to the surgical ward. The responsibilities of the former are the registration of new patients and therefore the examination of their physical state. Afterwards the patients were sent to the selected ward or in case of an emergency directly treated. A group of apprentices was closely watching and telling me in the meantime about the study system in Ghana, which requires them to study medicine for 7 years and do a housemanship for 2 years afterwards. Overall, the system resembles the German one. 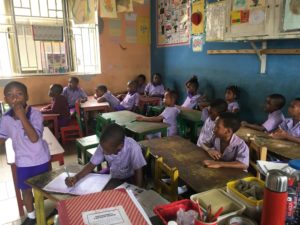 Fig. 1: classroom of a privat school

Due to a bacterial infect I had to stay at home most of the week. Still being weak, I was able to accompany another volunteer for one day into a private primary school. The children usually start school at the age of two years, the pupils of the class I visited were between five and six years old. Since Twi is their maternal language they were learning English that day and being tested on the vocabulary they had acquired the day before. The secondary and tertiary classes are held in English. Overall, education is being strongly promoted in Ghana, the enrollment rate is 84 percent. Nevertheless I had the impression that the system rather encouraged learning by heart instead of independent logical thinking.

During the second half of my internship I was deployed in the theatres of the surgical ward. Due to this, I had the chance to watch surgeries such as mymectomies, appendectomies and cesarean sections. Especially the childbirths were really impressive to me. 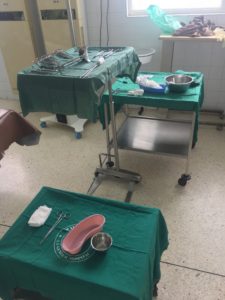 Fig. 2: instruments in the theatre

I was shown how to arrange the instruments prior to a surgery and how to clean them and the surfaces in the theatre afterwards. In case accessories such as sutures, syringes or bandages were required during the surgery it was my job to pass these on to the surgical team consisting of three surgeons. Further I have been assisting with the transfer of the patients from the surgery table onto the mobile bed. Additionally I got an insight into the field of anaesthesia since the majority of the patients got a spinal anaesthesia to prevent them from moving or suffering pain. The anaesthesist observes the vital parameters, more precisely the heart rate, blood pressure, oxygen saturation and respiration, and can extend the narcosis if needed. Every five minutes the stats are checked and filled into a chart.

Besides the work at the hospital there were plenty of things to discover in Ghana. First of all, one should mention the Ghanaian way of life which is extremely different to the German one. Everyone has a friendly open mindset and courtesy is a core value. Getting to know new people is as easy as can be since Ghanaians never keep quiet. 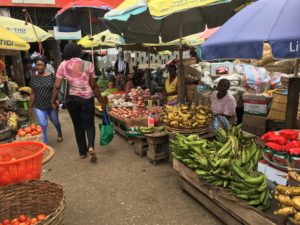 Of course, there were some traditions we had to adapt to, for instance the religion. Even though the great majority is catholic, the presence and missionary work needed getting used to. From a European point of view, the handling of waste was really shocking. There was no awareness of the long lifespan of plastics, neither there was waste separation or an appropriate disposal. Instead it is being burnt or thrown onto the streets.

On the other hand Ghana has a beautiful nature which can be seen in various national parks. We visited the Kakum National Park on our first weekend. There we had the chance to go on the canopy walk, a walkway suspended 30 meters in the air providing a stunning view over the rainforest. Afterwards we spent the night in a treehouse accompanied by a guide who explained the diverse sounds to us and told us about the studies done in the forest. At 6am we went on a tour right through the rainforest and were overwhelmed by the unique atmosphere. 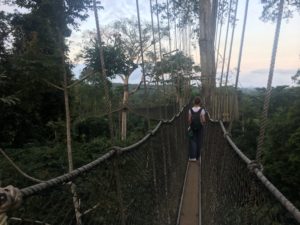 The second park I visited was Mole National Park in the north of Ghana. Before getting there we spent some time in Kintampo, one of the few cities in the north. There we took a bath between waterfalls and cuddled monkeys of the Fiema Monkey Sanctuary. Finally in the park, we went on two safaris, one by jeep and one by foot, during which we saw various antilopes, monkeys and most impressive elephants just ten meters away. Additionally we did a canoeing tour on a nearby river and visited the small village. 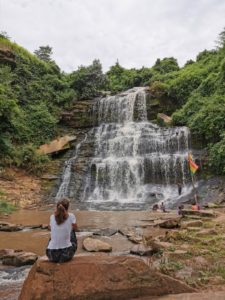 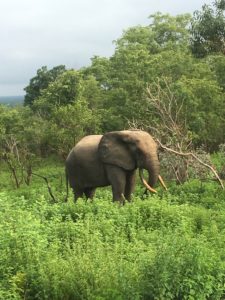 Fig. 6: an elephant in the Mole National Park

On the downside, the trip reminded me of the huge gap between the rich and the poor. On the one hand there is a small elite which is upholding the system, on the other most of the people live in poverty without the perspective of a professional advancement.

Altogether the internship in a Ghanaian hospital was definitely an experience I would’t want to miss. Getting to know new ways of coping with things and having to adapt to unfamiliar situations made me develop in terms of personal skills and start questioning. And probably most important it taught me that one doesn’t need material goods to be pleased.