Internship at a state hospital in Accra, Ghana

In July 2019 I had the once-in-a-lifetime opportunity to spend one month in Accra, the capital of the West African country Ghana. During that time I was able to live in a student house with people from Germany and locals, which allowed me to come into contact with the Ghanaian way of life and be confronted with cultural differences. But the main point for my stay was to gain medical experience as an intern at La General Hospital. 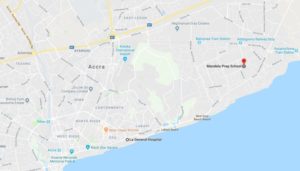 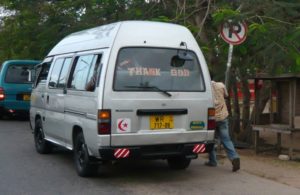 The La part of the name refers to the Area of Accra the hospital is located in, which is quiet far from the student house. As there is no governmental public transport system in Ghana, I got to work by Trotro. Trotros are minibuses that wouldn’t be allowed on European streets, due to them not being up to traffic standards such as TÜV, and thus are shipped to Africa and drive up and down the main roads of the main cities, as well as in-between them. There are no real time tables or schedules therefore you have to stand near a big street and listen to what the so-called “mates” scream out of the car, usually the rough direction accompanied by a hand sign. This system takes a while to get used to but once you grasp it, it is quiet easy. The hospital consists of various units or wards. For example there’s General OPD (outpatient department), an emergency ward and a surgical ward, however most of the wards are for maternal support. As a consequence all of the first floor and most of the second are for post-natal care and there is even another building for ante natal care. 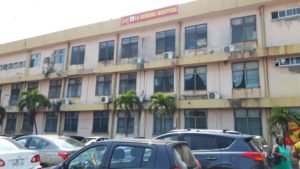 The front side of La General Hospital

I, however, got to spend my first week at the emergency ward. This ward treats people with acute symptoms and patients that need to stay overnight. What I mainly experienced there were malaria cases that were treated with infusions. Other cases were reaching from diabetes over hypertension to – our longest stay-in patient- a stroke. My responsibility was checking the vitals of the patients, changing their bedding and general nursing as well as observing the doctors during their work.
While this was a nice introduction to working at a hospital, I didn’t really get to do too much since there where 13 nurses for about four patients at a time. So when I was put into the surgical ward for the following week, I was quite excited, thinking I might get to see and do more and learn in the process. As my predictions turned out to be true, I decided to stay there for the rest of my internship because I found myself learning a lot about my field of interest. At my first day in the surgical theatre I primarily observed the operations and nurses, but after a while I was included in the process of preparing the theatre. First of all I cleaned and sterilised the instruments, learning the English vocabulary for them in the process. Then I did the same for the room and operation table, which I also got to set. During the surgeries I frequently handed the surgeons new equipment if needed. For some of the operations everything had to be carefully documented, from start and finishing time of the procedure over operating doctors and nurses to how many instruments where used. In case of any negative outcome of the surgery, especially instruments lost in patients, these documentations can be used to check everything and, if necessary, hold somebody responsible. 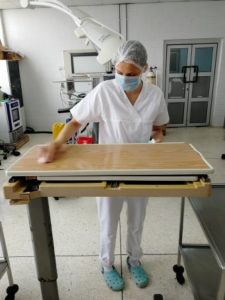 Cleaning the operation table in the surgical theatre 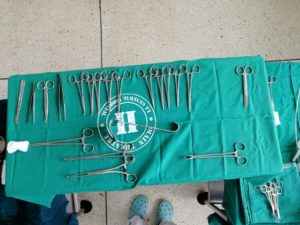 Part of a set operation table for a c-section 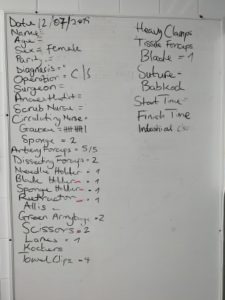 Example of documentation. Name of patient and surgeons not included for privacy purposes.

For my third week (second at the surgical ward), I decided to do two night shifts, for which I arrived at the hospital at 7:30 pm and left at 8:00 am. Usually there were no cases scheduled for the night but people had to be there in case of an emergency, which often consisted of C-sections. Luckily both times I spent the night at the hospital there were no emergencies, but we still had to constantly be ready to be woken up and get straight to work. In consequence we even slept in our hospital clothes, saving precious changing time in case of an emergency.
The most frequent operations that were performed were hernias and umbilical fibroids and even though there was a whole day full of them, my highlight were the C-sections, because little compares to seeing a child being born.
As much as I enjoyed myself at the hospital, working there took some adjusting. One problem that I ran into was Ghanaian English. It’s not that they had a heavy accent, you can easily get used to that, but they speak so called “Broken English” – English without any grammar and different vocabulary. For example, if a Ghanaian wants to ask their friend “Where are you going?” they will say “where you did go?” with a Ghanaian accent. That on its own was hard enough but more often than not they also mix in Twi, the local tribal language of Accra. You do get used to it but it takes quite some time.
Another, more expected problem were cultural differences. Ghana has a completely different work ethic. Everyone has a very relaxed attitude, even in presence of fatally ill patients.
This can lead to a very positive working atmosphere. Nurses where singing and dancing in the theatre as the radio was usually blaring on full volume. While this was more often than not enjoyable even though the dancing would probably be considered unprofessional by German standards. They also trusted me with way more than I was capable of, even offering me to be a scrub nurse for a c section.
But an attitude like this also had an effect on how some patients were treated. Most of the people with Malaria were just given an infusion and sat on a plastic chair for hours on end while having to go buy their medicine and water for themselves. There was always one bed free, as it was considered the “VIP” bed, meaning patients had to pay more to spend the day or night there. As a consequence patients with high fever had to sit instead of resting in a bed.
But what shocked me the most was that some nurses were openly and directly mean to patients. I was sharing responsibility for a patient who had suffered a stroke with a nurse in training and she straight out called her “the fat lady”. Another time this occurred was when a young girl, just about 13 to 15 years of age, had to be operated for an umbilical hernia and had forgotten to shave. The surgeons and nurses laughed at the girl while telling her she had to shave because there was “too much forest”. Ghanaian doctors are more a fan of the tough love.
As one can imagine the cultural differences didn’t end in the workplace. The hygienic standards were way lower and most of the German people in the student house got some kind of digestive problem or couldn’t handle the local food, which was unusually spicy for our standards. Everything was packed in plastic, which was usually just thrown on the ground and later collected and burned. There was loud music everywhere, in the Trotros, the streets and as mentioned the surgical theatre. At times I had to really hold on to the “German commitment to work” because the view on work there was that relaxed. Bureaucracy was handled very poorly at the hospital and I had to learn to improvise to get the best out of my time there.
The worst difference was the extreme poverty. Wherever you went you could always hear someone scream “Obroni” – the Twi word for white person, or more precisely foreigner People perceived you as rich because even a low income European is considerably well of by Ghanaian standards. Usually when you made casual conversation with someone, you’d be asked to take them to Germany. The worst instance of extreme poverty I witnessed was when I accidentally walked through a slum in Accra and a woman gave me her child and told me to go and take it with me. The lacking infrastructure was also proof for the economic situation of the country, especially the streets, which were barely fit to be driven on, due to several potholes. Asphalt was reserved for the big streets in central Accra and even there they had several holes in them. Every trotro or taxi ride was a whole culture shock itself as there are no rules for the traffic and people on the streets are trying to sell you a variety of things – be it food, old electronics or clothes – left and right. Prices were usually really low when set, like in grocery stores or at the mall. But for taxi rides or at markets you had to bargain. As you really get used to arguing about everything daily, you find yourself bargaining for a 2 cedi -67 cents- difference. 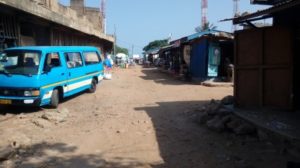 A typical side street in Ghana 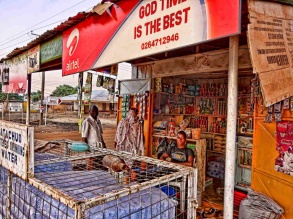 [for similar pictures refere to P2]: God Time Is The Best street shop 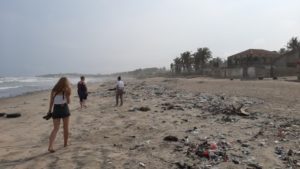 Plastic on Labadi Beach in Accra

The shops by the sides of the streets usually had religiously connoted names like “Only Jesus Will Enterprise”, “God’s Love Haircuts” or “The Lord is Gracious cold food store”. According to the 2010 census, the vast majority, about 71.2% were Christian, while most of the rest were Muslim [1]. So Trotros were plastered with stickers of Jesus and quotes from the bible and sometimes wandering priests sat in the front praying. There were various churches everywhere and mess lasted three hours. Religion was a very important part for most of the Ghanaians I met and I was often asked which church I attended. Even though I answered honestly that I don’t believe in God and don’t go to church, I was met with understanding and the conversation changed topic. However, you could also be confronted about your beliefs, especially if you mentioned that you believed in science and evolution, as Creationism is taught in most schools.
Other than these sometimes uncomfortable situations, everybody was extremely open and kind. It was easy to make friends, especially at the hospital. Not just the nurses but also the doctors were excited to teach me. The most enthusiasm was encountered when telling locals you wanted to get to know their country. Whenever I travelled I got a lot of advice from the nurses and people from the student house.
Travelling was amazing and easy due to long distance Trotros. Of course this wasn’t always a complete success and I got stuck in the middle of nowhere once, coming back from hiking.
I went to see the Kakum National Park near Cape Coast and the city itself, the second biggest city Kumasi and Lake Bosumtwe and – my definite travelling highlight – Wli Waterfalls near Hohoe in the Volta Region, where I and seven others wandered through the mountains for seven hours, even spending a bit of time in Togo, a neighbouring country of Ghana. The landscape is breath taking with rainforest further than one can see.

Hiking in the mountains of the Volta Region

To conclude this report I want to say that I value the time I got to spend abroad. Of course experiencing a completely different culture gives you a new perspective and I had never seen landscapes like those of Ghana before. But also working actual hours and being on my own in a foreign work environment shaped my view on things. Seeing the people at the hospital save patients’ lives and being a part of the work field I’m interested in will certainly help me with my future career choice.