Usually I started my working day at 8:30 am and stayed at imb-dynamik until 6 pm. In the evenings, I did what I always do: I went climbing, met friends and did sports. At one of the evenings, I went to school, to see the “Bunten Abend”. If I hadn’t been here, I would not have seen it. I think it was a really worthwhile evening and I had much fun to see what the “Bunte-Abend”-Team did.

My job at imb-dynamik was very different.
In the beginning I designed posters for a trade fair in September. They should tell the visitors what imb-dynamik does and with which projects they dealt. I could be creative and shape all posters. I had many ideas, but it was really difficult to combine my ideas with the ideas from the others and to implement all in a nice way on the computer.

On 4th July I went together with Dr. Norbert Breitsamter and his students from the University in Deggendorf to BMW in Dingolfing to watch the press plant. I was really impressed by the destabilization directly beside the machinery. But the more astonishing effect was that you also could feel the destabilization in 300 metres distance in an office. We sat down there for 20 minutes and the destabilization was so enormous that I can’t imagine how people can work there. After that we had a look to the tool manufacture. It’s 500 metres distant from the press plant and they can’t build tools exact to one nanometre because of the destabilization. Such machinery are often sensitive to vibrations, excited somewhere in the surroundings. Experiences have shown that the most effective way to have no or only insignificant vibrations is the so called passive vibration isolation, i.e. the machine is mounted on concrete slabs or steel plates to improve their torsional stability. Additionally the plates are standing on elastics elements (Viscodampers) for more stabilization. If you want to know which elastic element you need, you have to measure the vibration. This is one scope of work in which imb-dynamik is specialised in.

In the second week, we began to build special sensors, which could measure vibrations under water. The aim was to build sensors for a building site in Frankfurt. There we have to measure vibrations in 8 metres deep bore holes. We didn’t now, if there is water in the holes or not. Next to the building site, a railway line is situated and the client, for whom the new building is being built, wants to know, whether he has to support it elastically. First you had to think about what you need for them: Microdot-cable, metal cylinder, a sinker, the normal sensor, a hose for the Microdot-cable and some other utensils. The first step was to put the Microdot-cable into the hose. The Microdot-cable is extremely sensitive and damageable, so we have to protect it. It should never get wet. After that, we had to fix our sensor on the sinker and take the metal cylinder over it. Now we could combine them. The last important step was to fix everything and build a mounting where we can hold our sensor on a rope. Of course the sensors should not rust and so we sprayed them with zinc-spray. Two days later we checked whether they work in the Ammersee. 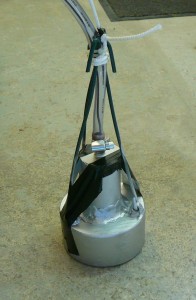 We used a charge amplifier, A/D converter and a Laptop to see immediately if the sensor works. We went to the steamship landing stage and set the sensor carefully on the ground of the lake. With a long pole we generated vibrations on the ground which our sensor could feel. At the end, we had a long graph which shows, if the sensor received a signal. Next week they drive to Frankfurt and measure two days every vibration of the different trains.

Also in the second week, on 12th July I went together with Heike Frauenhoffer to buildings of Allianz in Munich. We did a conservation of evidence. It is a documentation of the condition of a house or bridge. Normally they do it before next to the house/ bridge a building site starts. Most important for the conservation are cracks. If you can find any damages on the walls, you can’t rule out that the building site makes it more serious. So we went through the offices of Allianz and took photos from cracks and wrote down where they are and how big they are. Later, if they get bigger, imb-dynamik can find out, if the vibrations of the building site were too high or if something else happened.

In the last week I gained insight into the secretariat and what you have to do there. I helped the account staff, wrote bills and answered emails together with the secretary. In the afternoon, when she went home, I was responsible for the phone and the email entrance.

I also wrote offers together with the engineers. That means exactly, that they told me about their project and afterwards I thought about a solution. Later we talked again about it. Normally we had an order from somebody in which the job definition was accurate pretended. Mostly I wrote offers for vibration measuring or conservation of evidence. For this, you have first to decide, where it is important to do the conservation, maybe not in all houses around the building site. Then you have to find out, how many flats are in the houses and how many people are living in. Afterwards you have to calculate a price.

On the day before my last day, I went to a vibration measuring. It was in Garching at BMW. Next to the measurement position, a building site is located, where 12.5m long sheet pilings have to be hammered down into the ground. The result is a high vibration in the soil, which spreads to the buildings. Our task was to supervise, that the vibration wasn’t faulty for the building and the people, who work there. We built up our measurement equipment and waited till they started to hammer down the sheet pilings into the ground. Then we started our measuring. Later, when we were back at the office, we analysed the graphs. We asserted that there should be no problem with the vibrations for the people and the buildings.

In the whole time I learned much about vibrations, resonance and everything what belongs to this. One of the best points of the internship was, to see how a normal working day is elapsing , how much you have to do the whole day and how can you manage your day in many different ways. On the other hand I also learned much for school. In physical education we did exactly this topic before I started my internship.

Working at imb-dynamik never got boring. On one day we had sheep in garden in the afternoon. The office is in a big house with a really big garden in Buch (am Ammersee). 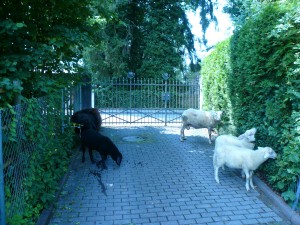 The environment is rurally and different from Gauting. Many neighbors have animals like chicken, sheep, horses and cows. On old woman has two adult sheep and three little sheep and they didn’t want to stay at their place and ran away to “our” garden. It took us half an hour to catch the sheep again. It was a really funny afternoon.