From the 5th to the 30th of July 2014, I did an internship in Johannesburg at a subsidiary of the German company Karl Storz. The Storz company produces and sells endoscopes for human beings, animals and for technical examination of machines with difficult access – e. g. turbines. I enjoyed my stay very much and had an interesting time in every respect – the work experience in the company as well as the stay in South Africa.

My plane arrived after an overnight flight at the O. R. Tambo International Airport in the morning of the 6th of July. My guest family picked me up and brought me to their house. As there is a huge crime rate in Johannesburg, it is common that the houses of the middle class are part of a complex. A complex is surrounded by electric fences and guarded by a watchman. In case of emergency there is an armed security system. I went to bed early that day and the next day, my internship already started.

My daily working hours at the company were from 9 o’clock in the morning to 3 o’clock in the afternoon. For the coming three weeks, I was taken to the office by my personal taxi driver Sydney because there is no public transport system in Johannesburg. At the office which was about ten kilometres away, I met Jodias Hurudza, my contact in Johannesburg I had already corresponded with at home. He introduced me to his colleagues and explained basic information about the company. Karl Storz still produces its items in Germany, so the subsidiaries in South Africa only sell them and do the maintenance and repairs. In Johannesburg, the office consists of two floors. On the first level there is an open plan office which is used by the employees when they have their office hours. On the second level, there is the warehouse.

The first week I started working in the financial field. For several days, I would sit with Bernard for about two hours who then explained to me the basis of his work: the planning process to achieve a budget for the next year, the analyses in order to check if everything worked as it was expected. He also taught me the process of pricing calculation, the stock analysis and obsolescence assessment, the General Ledger reconciliations and the debtor’s review and analysis.

What was amazing in this part of my internship, was the trust the people of the company had in me. Bernard showed me the current tables and also sent this confidential material. For this reason and because of Bernard’s well understandable explanations, I really got a deep insight into the processes of the company.

At the second part, I worked in the warehouse. Here, Moagi, the warehouse manager who liked to draw sketches and schemes in order to teach something, gave me an overview over the key aspects of the warehousing operations and of documentation and processing of the items. In the meantime, Nicholas showed me the process of answering demo requests. The demonstration stock is used by representatives who are presenting the devices to interested doctors. Everybody has to send in a formal request and Nicholas prepares the items and changes the position in the stock directory. He explained to me the process and I got the opportunity to assist him and his employees with their work. 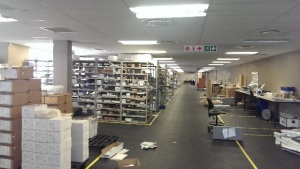 The third part of my internship dealt with the marketing field. I got a short introduction into the topic concerning the marketing at congresses, workshops and scholarships and also got further information via e-mail. Unfortunately, I was sick a couple of days.

Moreover my internship was enriched by special events.

As the Storz company is selling endoscopes, doctors and hospitals play a huge role, of course. They do not only sell their products but they are also in charge of the service for which they employ several technicians.

Once, I had the opportunity to join Magda, a sales’ representative, and Anton, the accompanying technician, to watch an operation in a hospital one and a half hours away from Johannesburg. The doctor wanted to try a new device of Storz and thus, I now could see the practical use of the endoscopes I had only learnt about theoretically.

After the operation, Anton showed me some pictures of wild lions’ operations. He later told me about his experience with operating wild lions with endoscopes. It is 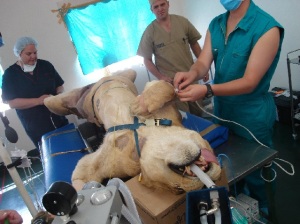 pretty dangerous as you do not know the exact dosage of drugs you need to anaesthetize a lion. Additionally, in order to catch them, you have to shoot them with a stun gun that only puts them to sleep for about half a minute. During this time you have to push the needle through the thick lion skin, and inject the medicine. Even though the lions being operated were young lions they can massively hurt a human with their claws. Once, a lion started to wake up and the animal keeper being present had to keep him in a position where he could not hurt anybody until the newly given anaesthetic would take effect.

Another highlight was the national sales’ conference of Storz. The company’s employees from whole South Africa came to Johannesburg in order to discuss the current success of the company’s sales. Here, I got to know amongst other people Kenneth Marcus, the chairman of Karl Storz in South Africa who invited me to his office in Cape Town.

At the last day of my internship I baked a cake for my last work day and we had a little farewell party. I did not only get a wonderful card with personal words by every employee but also a T-Shirt, a scarf, a wooly hat, a key fob and a bracelet. After I travelled for three weeks through South Africa with my family, I once again visited the office together with my father. The next day, we returned to Germany and this amazing stay came to an end.

Of course, my stay in South Africa did not only consist of work. I enjoyed the time with my guest family, as well. They have three children – two boys at the age of nine and six and a four year old girl – as well as two dogs, two birds, two goats and a horse. I would often play soccer or badminton with the children in their huge garden and the younger son also celebrated his birthday during my stay. As the family was half German, we watched the FIFA World Cup, too, of course. For the semi-finale Germany vs Brazil and the finale, friends joined us celebrated the German victories with us enthusiastically.

The World Cup also found great attention in the company and was a topic we talked about several times. Most of the employees had already been for Germany in 2010 when the world cup was in South Africa and also favoured them this year. So when they won the cup, I had a new nickname for some of the employees: “Champ” – although I, personally, had nothing to do with the victory at all. “Soccer unites people” might be a stale saying but for me, personally, it applied.

During my whole stay I felt the friendliness of the South African people. From the guys, I worked with, to the supermarket’s cashier or the gas station attendant – basically nearly every person I met there – everybody smiled, asked “How are you?” and really seemed interested in the answer. South Africa does have a bloody past and the crime and unemployment rates, especially in Johannesburg, are very high. Many people spend the whole night guarding parking cars in order to gather a few Rand (the South African currency) – but they stay friendly, smile at you and are neither obtrusive nor unpleasant. I have also experienced that in my holiday after the internship and besides the beautiful landscape and the exotic animals it is the main reason why I got to love South Africa.

I want to thank especially Vanita and Anele who ordered lunch for me everyday and found the good bye presents, to the storemen, I always had a good chat with and basically every person in the company as they all received me friendly and taught me willingly.